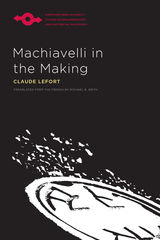 Machiavelli in the Making is both a novel interpretation of the Florentine’s work and a critical document for understanding influential French scholar and public intellectual Claude Lefort’s later writings on democracy and totalitarianism. Lefort extricates Machiavelli’s thought from the dominant interpretations of him as the founder of “objective” political science, which, having liberated itself from the religious and moralizing tendencies of medieval political reflection, attempts to arrive at a realistic discourse on the operations of raw power. Lefort ultimately finds that Machiavelli’s discourse opens the “place of the political” which had previously been occupied by theology and morality.

Claude Lefort (1924–2010) taught at the University of São Paulo, the Sorbonne, and the École des Hautes Études en Sciences Sociales. His books include The Political Forms of Modern So­ciety: Bureaucracy, Democracy, Totalitarianism (1986), Democracy and Political Theory (1989), Writing: The Political Test (2000), and Complications: Communism and the Dilemmas of Democ­racy (2007).


Translator's note Part I: The Question of the Oeuvre Part II: The Concept of Machiavellianism Part III: Reading The Prince Part IV: Reading The Discourses Part VI: The Oeuvre, Ideology, and Interpretation