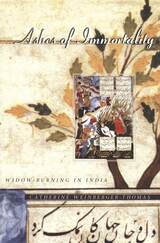 "At last, she arrives at the fatal end of the plank . . . and, with her hands crossed over her chest, falls straight downward, suspended for a moment in the air before being devoured by the burning pit that awaits her. . . ." This grisly 1829 account by Pierre Dubois demonstrates the usual European response to the Hindu custom of satis sacrificing themselves on the funeral pyres of their husbands—horror and revulsion. Yet to those of the Hindu faith, not least the satis themselves, this act signals the sati's sacredness and spiritual power.

Ashes of Immortality attempts to see the satis through Hindu eyes, providing an extensive experiential and psychoanalytic account of ritual self-sacrifice and self-mutilation in South Asia. Based on fifteen years of fieldwork in northern India, where the state-banned practice of sati reemerged in the 1970s, as well as extensive textual analysis, Weinberger-Thomas constructs a radically new interpretation of satis. She shows that their self-immolation transcends gender, caste and class, region and history, representing for the Hindus a path to immortality.
TABLE OF CONTENTS


List of Illustrations
Acknowledgments
Funereal Prelude
A Burning in Bali
A Question of Words
Immortality: Time Reckoned
The Truth about Women
Speech as Instrument
Sexual Colorings
Living Satis
Blue as Blood
Trial by Fire
Fire and the Fault of Karma
Handprint, Dagger, and Lemon
Mutilation and Voluntary Death
Rhetoric of Protest Suicide
Dizzying Heights of Violence
The Trammels of Resentment
A Rite of Exorcism
The Offering of the Self
The Fruits of One's Acts
The Corporality of the Dead
Death in the Telling
Rite and Belief
A Sati on the Shore of the Ganges (Stavorinus)
A Sati in Surat (Durlabh Ram)
The Dream as Proof
The Transmission of the Deadly Vow
Love in the Extreme
Under the Spell of Sacrifice
The Goddess's Body
Sati Divine, Earthly Satis
Cult and Apotheosis
Shekhavati, an Endangered Region
Belief and Mystification
True and False Traditions
Cross-Examination of a District
The Rite, the Law, and the Custom
Ritual and How to Use It
A Sati in Poona
Shared Passions
Menstruation and the Final Oblation
The Seasonal Fault
A Foreword in Retrospect
Notes
Glossary
Bibliography
Index