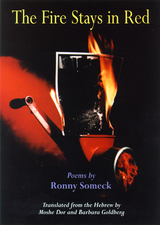 "My mother dreams in Arabic, I dream in Hebrew," says Ronny Someck. Born in 1951, he was uprooted from his native Iraq when he was four. Transplanted to Israel, Someck spent his childhood in a transit camp for new immigrants. There he was surrounded by music, the great singers Umm Kulthum, Farid al Atrash, and Fairuz shouldering up against Elvis Presley and Billie Holiday. No wonder he is so beloved in Israel. In what other poet do we find Tarzan, Marilyn Monroe, and cowboys battling with Rabbi Yehuda Halevi for the hearts and souls of Israelis?

Someck’s poems are rich in slang and distinguished by staccato rhythms, quick cuts, close-ups, and disturbing segues. As in film noir, the sensations are of speed, danger, uncertainty. His distinct Sephardi voice invokes the odors of falafel and schwarma, the army with its supporting cast of recruits and commandos, the bustle of southern Tel Aviv with its small garages, shops, cheap restaurants, its gangs and its Arab workers. He is also the troubadour of the lovelorn, with poems that are hot, erotic, comic, tragic, agape at the wonders of a tear and a tattoo and a snapshot and a bra and a scarecrow.