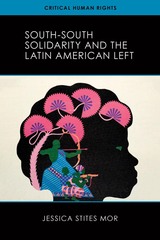 Transnational solidarity movements often play an important role in reshaping structures of global power. However, there remains a significant gap in the historical literature on collaboration between parties located in the Global South. Facing increasing repression, the Latin American left in the 1960s and 1970s found connection in transnational exchange, organizing with distant activists in Africa, the Middle East, and the Caribbean. By exploring the particularities of South-South solidarity, this volume begins new conversations about what makes these movements unique, how they shaped political identities, and their lasting influence.

Jessica Stites Mor looks at four in-depth case studies: the use of legal reform to accomplish the goals of solidarity embedded in Mexico's revolutionary constitution, visual and print media circulated by Cuba and its influence on the agenda of the Afro-Asian block at the United Nations, organizing on behalf of Palestinian nationalism in reshaping Argentina's socialist left, and the role of Latin American Catholic activists in challenging the South African apartheid state. These examples serve as a much-needed road map to navigate our current political climate and show us how solidarity movements might approach future struggles.
AUTHOR BIOGRAPHY
Jessica Stites Mor is an associate professor of history at the University of British Columbia, Okanagan (Siylx territory). She is the author of Transition Cinema: Political Filmmaking and the Argentine Left since 1968 and editor of Human Rights and Transnational Solidarity in Cold War Latin America.
REVIEWS
"This volume so convincingly demonstrates South-South interactions are as important if not more so than interactions from the north to the south. Both scholars and a broader public with interests in solidarity and political mobilizations will warmly welcome Stites Mor's insightful contributions to our understandings of solidarity."—Marc Becker, author of Twentieth-Century Latin American Revolutions


"Stites Mor's expertise has established her as a leading authority on histories of Latin America, solidarity, human rights and culture. This book builds on her work, positioning the region in a global context and offering new conceptual frameworks to theorize solidarity, its practices, results, and legacies. This exciting and ambitious contribution is a pleasure to read."—Tanya Harmer, author of Beatriz Allende: A Revolutionary Life in Cold War Latin America