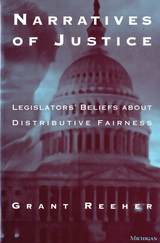 Narratives of Justice offers a provocative, contemporary look at the timeless questions of justice and fairness. Using face-to-face interviews, Grant Reeher plumbs the minds of legislators for their beliefs about distributive justice and attempts to discover the ways in which those beliefs influence their behavior. The book calls into question many notions of American political ideology and, in particular, the idea of an "American exceptionalism" regarding views from the political left, and the dominance in the United States of a "liberal tradition."

Political philosophers have amassed a large body of work on justice and fairness from a theoretical perspective, but there is comparatively little empirical work on the subject. The work that does exist concentrates on the beliefs of the public. We know very little concerning the beliefs about justice held by political elites. This work offers a window into the beliefs of legislators, a group for which such an inquiry is rarely undertaken.

The book is based on a set of extended, in-depth interviews with the members of the Connecticut State Senate as well as a year of close observation of the Senate in action. The interviews averaged four hours in length and covered a variety of topics related to fairness. Through this material, Reeher employs a narrative-based framework to understand the patterns in the senators' interview responses, and develops a typology of the senator's narratives. These narratives vary in both content and form, and as a whole present a surprising range of views.

Narratives of Justice will be of interest to those concerned with justice, political ideologies, and political beliefs, as well as state and local politics and, more generally, American politics. Its wide research and thorough documentation make it a useful guide to the literature within and beyond political science concerning beliefs, ideologies, legislative behavior, and qualitative research methods.