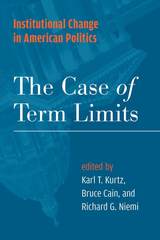 Legislative term limits adopted in the 1990s are in effect in fifteen states today. This reform is arguably the most significant institutional change in American government of recent decades. Most of the legislatures in these fifteen states have experienced a complete turnover of their membership; hundreds of experienced lawmakers have become ineligible for reelection, and their replacements must learn and perform their jobs in as few as six years.

Now that term limits have been in effect long enough for both their electoral and institutional effects to become apparent, their consequences can be gauged fully and with the benefit of hindsight. In the most comprehensive study of the subject, editors Kurtz, Cain, and Niemi and a team of experts offer their broad evaluation of the effects term limits have had on the national political landscape.

"The contributors to this excellent and comprehensive volume on legislative term limits come neither to praise the idea nor to bury it, but rather to speak dispassionately about its observed consequences. What they find is neither the horror story of inept legislators completely captive to strong governors and interest groups anticipated by the harshest critics, nor the idyll of renewed citizen democracy hypothesized by its more extreme advocates. Rather, effects have varied across states, mattering most in the states that were already most professionalized, but with countervailing factors mitigating against extreme consequences, such as a flight of former lower chamber members to the upper chamber that enhances legislative continuity. This book is must reading for anyone who wants to understand what happens to major institutional reforms after the dust has settled."
---Bernard Grofman, Professor of Political Science and Adjunct Professor of Economics, School of Social Sciences, University of California, Irvine

"A decade has passed since the first state legislators were term limited. The contributors to this volume, all well-regarded scholars, take full advantage of the distance afforded by this passage of time to explore new survey data on the institutional effects of term limits. Their book is the first major volume to exploit this superb opportunity."
---Peverill Squire, Professor, Department of Political Science, University of Iowa

Karl T. Kurtz is Director of the Trust for Representative Democracy at the National Conference of State Legislatures.

Richard G. Niemi is Don Alonzo Watson Professor of Political Science at the University of Rochester.