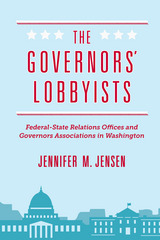 Today, approximately half of all American states have lobbying offices in Washington, DC, where governors are also represented by their own national, partisan, and regional associations. Jennifer M. Jensen’s The Governors’ Lobbyists draws on quantitative data, archival research, and more than 100 in-depth interviews to detail the political development of this constellation of advocacy organizations since the early 20th century and investigate the current role of the governors’ lobbyists in the U.S. federal system.


First, Jensen analyzes the critical ways in which state offices and governors’ associations promote their interests and, thus, complement other political safeguards of federalism. Next, she considers why, given their apparent power, governors engage lobbyists to serve as advocates and why governors have created both individual state offices and several associations for this advocacy work. Finally, using interest group theory to analyze both material and political costs and benefits, Jensen addresses the question of interest group variation: why, given the fairly clear material benefit a state draws from having a lobbying office in Washington, doesn’t every state have one?


This assessment of lobbying efforts by state governments and governors reveals much about role and relative power of states within the U.S. federal system.