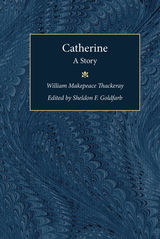 The Thackeray Edition proudly announces two additions to its collection: Catherine and The Luck of Barry Lyndon. The Thackeray Edition is the first full-scale scholarly edition of William Makepeace Thackeray's works to appear in over seventy years, and the only one ever to be based on an examination of manuscripts and relevant printed texts. It is also a concrete attempt to put into practice a theory of scholarly editing that gives new insight into Thackeray's own compositional process.

Written in 1839-40 for Fraser's Magazine, Catherine was Thackeray's first novel. Although originally intended as a spoof of the 1830s Newgate school of criminal romance, it has intrinsic merit of its own for its cynical narrator and roguish heroine, both of whom harbinger similar creations in Vanity Fair eight years later.

Sheldon F. Goldfarb is an independent scholar who received his Ph.D. from the University of British Columbia.