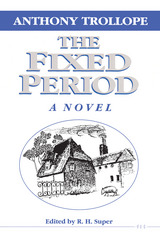 At a time when concern over the ethics of euthanasia and the implications of a rapidly aging population are frequent topics of discussion, Trollope’s only science fiction novel strikes a very modern chord. The Fixed Period, begun in 1880 when Trollope was 65, is set in the then far-distant year of 1980. The story is narrated by the president of the fictitious Republic of Britannula, an ex-British colony on an imaginary island near New Zealand. The original young settlers, led by their president, adopt a plan called the Fixed Period. Under this plan, the island would be relieved of the burden of an aging population by calling for compulsory euthanasia for citizens reaching the age of 67. Opposition to the plan grows as the time approaches for “depositing” the first citizen in the euthanasia park, and the elderly citizens successfully persuade the British government to send a gunboat armed with a powerful new weapon to reannex the country.

Trollope’s satiric portrayal of the statisticians who calculate the savings to be realized by putting the old people away before they become an expensive catastrophic burden, and the ironic presentation of the narrator’s justification of euthanasia by appeal to Christian practice and doctrine, will delight contemporary readers. Trollope’s strong dislike of government bureaucracy is evident throughout, as is his awareness of the dangers to the world of an imagined weapon of destruction not unlike (in its effect) the atomic bomb.

In making accessible the complete text of this work with corrections from the original manuscript, Super has performed an invaluable service for Trollope scholars and enthusiasts.
REQUEST ACCESSIBLE FILE