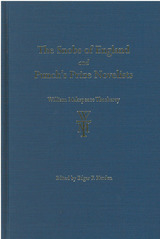 This volume of The Snobs of England and Punch's Prize Novelists is an addition to The Thackeray Edition collection, the first full-scale scholarly edition of William Makepeace Thackeray's works to appear in over seventy years, and the only one ever to be based on an examination of manuscripts and relevant printed texts. It is also a concrete attempt to put into practice a theory of scholarly editing that gives new insight into Thackeray's own compositional process. In The Snobs of England, a series of amusing satirical sketches, Thackeray provides a panoramic awareness of the many varieties of human folly, identifying snobbery not as a social attitude but as the unworthy admiration of foolish things. Punch's Prize Novelists presents a series of illustrated burlesque parodies of Thackeray's contemporary writers, including Edward Bulwer, Benjamin Disraeli, Mrs. Catherine Gore, G.P.R. James, Charles Lever, and James Fenimore Cooper. The works are edited here from a comparative study of all relevant documents: from the first published appearances to the last editions touched by the author.