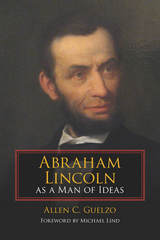 Despite the most meager of formal educations, Lincoln had a tremendous intellectual curiosity that drove him into the circle of Enlightenment philosophy and democratic political ideology. And from these, Lincoln developed a set of political convictions that guided him throughout his life and his presidency. This compilation of ten essays from Lincoln scholar Allen C. Guelzo uncovers the hidden sources of Lincoln’s ideas and examines the beliefs that directed his career and brought an end to slavery and the Civil War.

AUTHOR BIOGRAPHY
Allen C. Guelzo, the author of Lincoln and Douglas: The Debates That Defined America, is the Henry R. Luce Professor of the Civil War Era at Gettysburg College. He is a three-time winner of the Lincoln Prize, for Abraham Lincoln: Redeemer President (2000), Lincoln’s Emancipation Proclamation: The End of Slavery in America (2005), and Gettysburg: The Last Invasion (2013), the last of which was a New York Times best seller.
TABLE OF CONTENTS