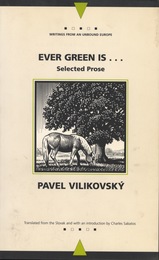 Hailed as one of the most important Eastern European writers of the post-Communist era, Pavel Vilikovsky actually began his career in 1965. But the political content of his writing and its straightforward treatment of such taboo topics as bisexuality kept him from publishing the works collected here until after the Velvet Revolution.
AUTHOR BIOGRAPHY
PAVEL VILIKOVSKÝ (1941–2020) published his first collection of stories in 1965 and has published numerous other works in his native Slovakia. In 1997 Vilikovský won the Vilenica Award for Central European literature.


"The originlaity of this work lies, first of all, in its style...and second of all, in the nature of the author's meditations on such subjects as death and dying, imagination and literature...Before the twentieth century closes its door, it would be extremely salutary to spend some time in the Bratislava of Pavel Vilikovsky, as we have spent some time in the Dublin of James Joyce or in the London of Virginia Woolf." —World Literature Today

Everything I Know about Central Europeanism (with a Little Friendly Help from Olomouc and Camus)
Ever Green Is . . .
A Horse Upstairs, a Blind Man in Vráble