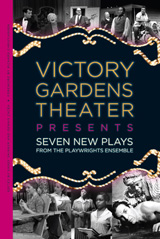 Victory Gardens Theater Presents: Seven New Plays from the Playwrights Ensemble
edited by Sandy Shinner and Dennis Zacek
foreword by Richard Christiansen
Northwestern University Press, 2006
Cloth: 978-0-8101-2346-5
In 2001, Victory Gardens Theater received the Tony Award for Regional Theatre and was hailed by the Wall Street Journal as "one of the country's most important playwrights' theaters." This recognition helped the theater take its rightful place alongside Chicago's world-class local theaters. Nearly 250 plays have been produced at Victory Gardens since it was founded in 1974. More than half of these plays have been world premieres, many of which have gone on to national success. This theater's commitment to producing primarily new plays, most by Chicago authors, makes it a unique and exciting institution.

This collection features seven plays by talented authors from the twelve-member Playwrights Ensemble at Victory Gardens. Their works tackle a wide range of topics from a colorful and imaginative retelling of the Medea legend set in the Carribbean to the desperation and regret that can fill a high-school reunion, from a feisty stroke-survivor claiming her independence to a historical drama about the first free man of color to attend Ohio University. Whether focusing on the drama between the four walls of a home or testing the broader realms of culture, history, and politics, the Victory Gardens Theater has always encouraged diverse perspectives and supported original work. Victory Gardens Theater Presents showcases some of the best examples of the distinctive talent that continues to find a home there.
AUTHOR BIOGRAPHY
Sandy Shinner joined Victory Gardens Theater in 1979 and is currently associate artistic director. She has directed over 100 productions, most recently the world premieres of Claudia Allen's Hanging Fire at Victory Gardens, Joanna McClelland Glass' Trying, which transferred Off-Broadway after its Victory Gardens run, and Kathleen Tolan's Memory House at Actors Theatre of Louisville's Humana Festival and Victory Gardens.

Dennis Zacek, now in his 27th season as artistic director at Victory Gardens Theater, has directed more than 150 productions since the theater's founding. Recently, Zacek was honored with the League of Chicago Theatres' 2004 Artistic Leadership Award. He is a professor emeritus at Loyola University and resides in Chicago.
TABLE OF CONTENTS