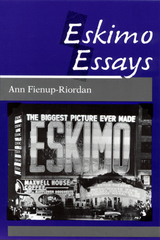 Eskimo Essays introduces the reader to important aspects of the ideology and practice of the Yup’ik Eskimos of western Alaska, past and present. The essays point the way toward a fuller recognition of how Yup’ik Eskimos differ from the popular Western image of the Eskimo that was born largely without reference to Yup’ik reality. By describing the reality  of Yup’ik life, Eskimo Essays extends our understanding of Esimos in general and Yup’ik Eskimos in particular.

Ann Fienup-Riordan argues that Western observers have simultaneously naturalized Eskimos as paragons of simplicity and virtue and Western imperialism. This process has often ignored Eskimo concepts of society, history, and personhood. An original assumption of similarity to Western society has profoundly affected the current Euro-American view of Eskimo history and action. Non-natives have taken an idealized Western individual, dressed that person up in polar garb, and then assumed they understood the garment’s maker. The result is a presentation of Eskimo society that often tells us more about the meaning we seek in our own. Moreover, modern Eskimos have risen to the challenge and to some extent become what we have made them.

Bridging the gap between informed scholarships and popular concepts, Fienup-Riordan  provides a compelling and fresh presentation of Yup’ik life—cosmology, the missionary experience, attitudes toward conservation, Eskimo art, the legal system, warfare, and ceremonies.

AUTHOR BIOGRAPHY
Ann Fienup-Riordan is an anthropologist who has published widely on the Eskimos of Alaska.