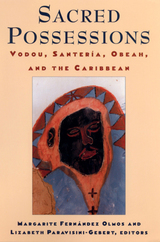 Sacred Possessions is an unprecedented collection of thirteen comparative and interdisciplinary essays exploring the cross-cultural dynamics of African-based religious systems in the Caribbean. The contributors analyze the nature and liturgies of Vodou, Santeria, Obeah, Quimbois, and Gaga as they form one central cultural matrix in the region. They ask how these belief systems were affected by differing colonial histories and landscapes, and how they affected other cultural expressions (from the oral tradition to popular art and literature), and how they have been perceived and (mis)represented by the West.

The book is a unique contribution to the study of the Caribbean as a site of multiculturalism, demonstrating the linkages between anthropology, religion, literature, and popular culture. Also included are a stunning photoessay on Cuban Santeria, a glossary of terms, and an insightful introduction by the editors.