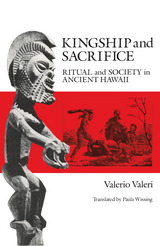 Valeri presents an overview of Hawaiian religious culture, in which hierarchies of social beings and their actions are mirrored by the cosmological hierarchy of the gods. As the sacrifice is performed, the worshipper is incorporated into the god of his class. Thus he draws on divine power to sustain the social order of which his action is a part, and in which his own place is determined by the degree of his resemblance to his god. The key to Hawaiian society—and a central focus for Valeri—is the complex and encompassing sacrificial ritual that is the responsibility of the king, for it displays in concrete actions all the concepts of pre-Western Hawaiian society. By interpreting and understanding this ritual cycle, Valeri contends, we can interpret all of Hawaiian religious culture.
TABLE OF CONTENTS


Preface
Acknowledgments
Introduction: The Sources
Part 1. Sacrifice and the Gods
1. Summary of Hawaiian Theology
Cosmogony
The Pantheon
The Notion of Akua: Preliminary Conclusions
2. The Elements of Sacrifice
Preliminary Definition
Classification of Sacrifices according to Their End or the Occasion on Which They Are Made
The Symbolism of the Offering
The Role of Prayer
The Offering as Food
Remarks concerning the Vocabulary of Sacrifice
Theories of Sacrifice
A Model of Hawaiian Sacrifice
Firstfruits Sacrifice
Conclusion
3. Gods and Humans
Pure and Impure
Kapu and Noa
Mana
Conclusion
Part 2. Sacrifice and Hierarchy
4. The Hierarchy of Sacrifices
The Hierarchy of the Gods and the Hierarchy of Men
Sacrifice and the Hierarchy of the Sexes
Sacrifice and Rank
Conclusions
5. Sacrifice and Kingship
The "Sacrificer": Kahuna and Ali'i
The Priesthood
Kingship
6. The Hierarchy of Temples
Introduction
The Concept of "Heiau"
Functional Types, Architectural Types
The Temple System
Part 3: The Sacrifice of the Hawaiian King
Introduction
Remarks on Method
The Calendar
7. The Makahiki Festival
The Makahiki Festival
Transitional Rites
8. The Luakini Temple Ritual
Preliminaries
The Luakini Temple and Its Furnishings
Huikala Rites
Ritse for Appropriating the Haki 'ohi'a
The 'Aha Helehonua Rite
The Kauila Nui Rite
Rites for Incorporating the God into the Temple
Rites for the Final Transformation of the God
The Rite of Kahoali'i and the Hono Rite
The Final Hale o Papa Rites
The Ritual Syntagma according to I'i and S. M. Kamakau
The Treatment of Human Victims
Conclusion
Notes
Glossary
References
Index