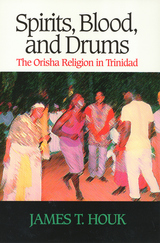 James Houk's field work in Trinidad and subsequent involvement in the Orisha religion allows him a uniquely intimate perspective on a complex and eclectic religion. Originating in Nigeria, Orisha combines elements of African religions (notably Yoruba), Catholicism, Hinduism, Protestantism Spiritual Baptist, and Kabbalah. A religion of spirits and spirit possession, ceremonies and feasts, churches and shrines, sacrifices and sacred objects, Orisha is constantly shifting and unstable, its practice widely varied. As a belief system, it is a powerful presence in the social structure, culture, and, more recently, the political realm of Trinidad.

Houk carefully examines the historical forces that have transformed Orisha from a relatively simple religion in colonial Trinidad to an abstruse mix of belief, ritual, and symbolism. The voices of worshippers and Orisha leaders spring to life the intensity and power of the religion. Houk's own recounting of participation in many of the mystical ceremonies, including taking on the important role of drummer in several feasts, his initiation into Orisha, and his exceptional field research provide fascinating details essential in understanding the development of this Caribbean religion.

James T. Houk, an independent scholar, holds a Ph. D. in anthropology from Tulane University and has published several articles on Caribbean religion.

Part I
1. Orisha Experiences
2. Religion, Postmodernism, and Methodology
3. The Setting

Part III
8. Spirits and Spirit Possession
9. Social Organization of the Orisha Religion
10. The Orisha and Their Abodes
11. The Ebo, Feast for the Gods