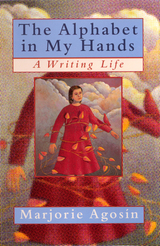 Marjorie Agosín writes of a beloved childhood nanny: "Since I was Jewish she baptized me with holy water brought forth from the fonts of nearby churches. She told me to stay very still so I wouldn't sprout horns. . . . I was somewhere between taciturn and happy gazing into the mirror as if approaching the edge of a cliff . . . and I watched myself in the deep, transparent veil of this night of all nights." Many of the themes expressed in this vignette—cultural dissonance, family, and community—are poetically intertwined throughout The Alphabet in My Hands. Agosín takes us on a personal journey of discovery that is as much internal reflection as it is an exodus across continents and decades.

Agosín's childhood and early adolescence were spent with her Jewish family in Chile. While her family raised her to regard her Jewish heritage with loving awareness, they also participated in the dominant Catholic culture—an aunt organized Easter egg hunts and her mother admired the beauty of Chile's Catholic churches. The young Agosín became keenly aware of her dual identity in her country, both as a participant and an outsider.

The second half of The Alphabet in My Hands recounts the events that forced her family to emigrate to America: the overthrow of Salvador Allende by General Augusto Pinochet. Agosín writes of her new life in Athens, Georgia, of the sudden loss of all that was familiar. Ostracized as an emigrant—a "non-white" with a strange foreign accent—her high school years were made even more painful by the news from Chile: prisoners taken and classmates disappearing or shot.

Years later, Agosín goes back to Chile and she travels there with her own children. As she stares down at her old homeland from the plane, she writes: "Why do I love this place that forced us into exile, that punished my father for being a Jew?" And in the final chapter of The Alphabet in My Hands, this award-winning poet addresses two important topics: her current residence in New England and the central role of writing and literature in her life.

AUTHOR BIOGRAPHY
MARJORIE AGOSÍN recently was honored with a United Nations Leadership Award for Human Rights. A professor of Spanish at Wellesley College, she has written many books of poetry and fiction. Her latest book is A Map of Hope: Women's Writing on Human Rights (Rutgers University Press).