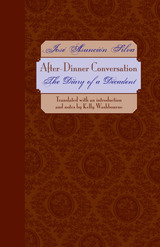 Lost in a shipwreck in 1895, rewritten before the author's suicide in 1896, and not published until 1925, José Asunción Silva's After-Dinner Conversation (De sobremesa) is one of Latin America's finest fin de siècle novels and the first one to be translated into English. Perhaps the single best work for understanding turn-of-the-twentieth-century writing in South America, After-Dinner Conversation is also cited as the continent's first psychological novel and an outstanding example of modernista fiction and the Decadent sensibility. Semi-autobiographical and more important for style than plot, After-Dinner Conversation is the diary of a Decadent sensation-collector in exile in Paris who undertakes a quest to find his beloved Helen, a vision whom his fevered imagination sees as his salvation. Along the way, he struggles with irreconcilable urges and temptations that pull him in every direction while he endures an environment indifferent or hostile to spiritual and intellectual pursuits, as did the modernista writers themselves. Kelly Washbourne's excellent translation preserves Silva's lush prose and experimental style. In the introduction, one of the most wide-ranging in Silva criticism, Washbourne places the life and work of Silva in their literary and historical contexts, including an extended discussion of how After-Dinner Conversation fits within Spanish American modernismo and the Decadent movement. Washbourne's perceptive comments and notes also make the novel accessible to general readers, who will find the work surprisingly fresh more than a century after its composition.
AUTHOR BIOGRAPHY
JOSÉ ASUNCIÓN SILVA (1865-1896) was a renowned Colombian writer and is still one of the country's most revered cultural icons.KELLY WASHBOURNE is Assistant Professor of Spanish Translation at Kent State University in Ohio.
TABLE OF CONTENTS