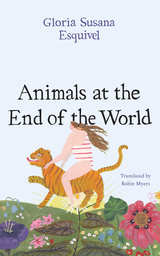 Animals at the End of the World begins with an explosion, which six-year-old Inés mistakes for the end of the world that she has long feared. In the midst of the chaos, she meets the maid’s granddaughter, Mariá, who becomes her best friend and with whom she navigates the adult world in her grandparents’ confined house. Together, they escape the house and confront the “animals” that populate Bogotá in the 1980s. But Inés soon realizes she cannot count on either María or her preoccupied and conflicted parents. Alone, she must learn to decipher her outer and inner worlds, confronting both armies of beasts and episodes of domestic chaos. In the process, she also learns what it means to test boundaries, break rules, and cope with the consequences. The first novel by Colombian author Gloria Susana Esquivel, Animals at the End of the World is a poetic and moving coming-of-age story that lingers long after its final page.
AUTHOR BIOGRAPHY
Gloria Susana EsquivelBogotá, ColombiaGloria Susana Esquivel teaches in the creative writing master’s program at the Instituto Caro y Cuervo in Bogotá and has one published book of poems, El lado salvaje. This is her first novel. Robin Myers is a Mexic
TABLE OF CONTENTS