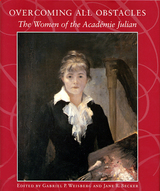 Overcoming All Obstacles: The Women of the Académie Julian is the first book to examine late nineteenth-century Paris's most famous training ground for the leading women artists of the period. The Académie Julian was founded in Paris in 1868, initially to prepare students for entry to the Ecole des Beaux-Arts, the nineteenth-century's preeminent art school. Because women could not study at the Ecole des Beaux-Arts until 1897, Julian itself became an international equivalent for many of the late nineteenth- and early twentieth-century's most important women artists.

Not only does Overcoming All Obstacles introduce the reader to many works by women artists-both famous and lesser known-but the essays offer a cultural and historical context in which to appreciate their art. Gabriel Weisberg's essay concentrates on the rigorous training methods enforced by Rodolphe Julian and the teachers at the Academy. Jane Becker explores the competitive environment of the Julian Academy as it affected the Ukrainian painter Marie Bashkirtseff and the Swiss painter Louise-Catherine Breslau. Essays by Catherine Fehrer, the leading scholar of the Académie Julian, and Tamar Garb, an art historian who focuses on the training of women artists, give us a richer understanding of the Académie Julian's place in the sphere of art education in late nineteenth-century Paris.

Generously illustrated with both color and black-and-white images, this volume includes documentary photographs and caricatures that have never before been reproduced. The core of the book draws on the large collection of the Académie Julian Del Debbio, the Académie Julian's successor institution in Paris. This publication accompanied an exhibition organized by the Dahesh Museum in New York that opened after its exhibition at the Sterling and Francine Clark Art Institute in Williamstown.  The exhibition subsequently continued to the Dixon Gallery and Gardens, Memphis.

AUTHOR BIOGRAPHY
GABRIEL P. WEISBERG is professor of art history at the University of Minnesota and author of numerous essays and books on French art of this period. He is guest curator for this exhibit.

JANE R. BECKER is the former assistant curator of the Dahesh Museum.