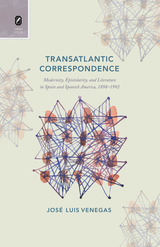 Transatlantic Correspondence: Modernity, Epistolarity, and Literature in Spain and Spanish America, 1898–1992 by José Luis Venegas explores how influential Spanish and Spanish American writers used letters in their literary works to formulate distinctive visions of modernity. Bringing into the discussion authors such as Rubén Darío, Miguel de Unamuno, Carmen Martín Gaite, and Gabriel García Márquez, Venegas reveals unsuspected connections between the authors’ literary use of epistolary writing and their opinions about the place of Hispanic culture and civilization within a global context. Transatlantic Correspondence contributes to broader debates on literary transnationalism and the contradictory nature of modernity.

Each chapter frames literary works by authors from both sides of the Atlantic within key historical events spanning the loss of Spain’s overseas possessions in 1898 to the commemoration of Columbus’s quincentennial in 1992. This broad range of historical reference is counterpointed by the nuanced examination of a single formal feature in a wide variety of canonical and non-canonical texts. Drawing on insights from postcolonial studies, the book addresses the link between historical transformations that traverse decades and continents and specific stylistic choices in order to foster an understanding of Hispanic literary and cultural studies that is not limited by categories such as “movement,” “generation,” and “national literature.”
AUTHOR BIOGRAPHY
José Luis Venegas is assistant professor of Romance Languages and Interdisciplinary Humanities at Wake Forest University.