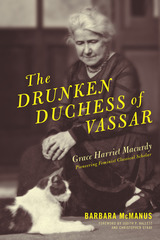 In this biography, Barbara McManus recovers the intriguing life story of Grace Harriet Macurdy (1866–1946), Professor of Greek at Vassar College and the first woman classicist to focus her scholarship on the lives of ancient Greco-Roman women. Fondly known as “the Drunken Duchess,” although she never drank alcohol, Macurdy came from a poor family with no social, economic, or educational advantages. Moreover, she struggled with disability for decades after becoming almost totally deaf in her early fifties. Yet she became an internationally known Greek scholar with a long list of publications and close friends as renowned as Gilbert Murray and John Masefield.

Through Macurdy’s eyes and experiences, McManus examines significant issues and developments from the late nineteenth to the mid-twentieth century, such as the opening of higher education to women, the erosion of gender and class barriers in the professions, the delicate balancing act between personal and professional life required of women, the marginalized role of women’s colleges in academic politics, and changes in the discipline and profession of Classics in response to the emerging role of women and new social conditions.


“Macurdy’s life is fascinating, and McManus has uncovered an amazing collection of primary sources about it.” —Elizabeth Carney, Clemson College

TABLE OF CONTENTS
THE DRUNKEN DUCHESS OF VASSAR
Half Title Page
Title Page
Copyright
Dedication
CONTENTS
FOREWORD
ACKNOWLEDGMENTS
ABBREVIATIONS FOR FREQUENTLY CITED ARCHIVAL COLLECTIONS
PROLOGUE: Women at the Well
CHAPTER 1: The Drunken Duchess: A Woman of Contrasts
The Drunken Duchess
CHAPTER 2: Family and Childhood
Loyalist Background
Grandparents
Robbinston, Maine
Watertown, Massachusetts
Education
CHAPTER 3: From the Annex to Vassar
Professional Ambition
Cambridge School for Girls
Family Cooperation
CHAPTER 4: Teacher and Scholar
Abby Leach and Her Greek Department
Learning to Teach
Interaction with Students Outside the Classroom
Anita Hemmings
Family Matters
Becoming a Scholar
Earning the Credentials
The Chronology of the Extant Plays of Euripides
Abby Leach: “I do not trust Miss Macurdy”
Grace Macurdy: Annus Horribilis (1907)
James Monroe Taylor: “We want peace and we want a fair division of work.”
Grace Macurdy: “I am ready to be quoted.”
Abby Leach: “It has been bewildering to be charged with making attacks and dealing hard treatment.”
James Monroe Taylor: “We cannot be blind to the fact that the issue is largely personal.”
Grace Macurdy: “That sort of thing I suppose vincendum ferendo est! [must be conquered by enduring]”
James Monroe Taylor: “The breach shall be closed up”
Henry Noble MacCracken: “Certain matters will require a careful treatment”
Grace Macurdy: “I do not know quite what Miss Leach’s object is”
Abby Leach: “Greek has no need of Latin”
Grace Macurdy: “Miss Macurdy should receive the dignity of the direction of the Department of Greek”
Epitaph: “Could I really grow if I had to suppress every idea I had that disagreed a little with what Abby thought?”
CHAPTER 7: Setting a Course
In the Footsteps of (Male) Scholars
Gilbert Murray and World War I
Jane Ellen Harrison
Troy and Paeonia
Deafness
Colleague and Mentor
CHAPTER 8: Unconventional Families
“My Children”
Cats
A Sort of Marriage
“The Four”
CHAPTER 9: Fighting for Justice
The Capps-Hill Controversy
“It would be unendurable for our side to be utterly silenced.”
The Women’s Hostel Controversy
CHAPTER 10: Redefining the Classical Scholar as a Woman
Hellenistic Queens
Vassal-Queens
“The constantly expanding horizon of Greek studies”
“Surprising to Be Seventy”
CHAPTER 11: Retirement: “Now Begin the Folio”
War Work
The Quality of Mercy
Pioneer Ancestors and Encyclopaedia Britannica
Illness and Death
Epilogue
POSTSCRIPT
FIRST GENERATION
SECOND GENERATION (CHILDREN)
THIRD GENERATION (GRANDCHILDREN)
FIRST GENERATION
SECOND GENERATION (CHILDREN)
THIRD GENERATION (GRANDCHILDREN)
APPENDIX 2: Chronological List of Scholarly Publications of Grace H. Macurdy
Reprints
BIBLIOGRAPHY
INDEX