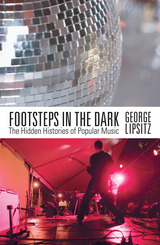 Most pop songs are short-lived. They appear suddenly and, if they catch on, seem to be everywhere at once before disappearing again into obscurity. Yet some songs resonate more deeply—often in ways that reflect broader historical and cultural changes.

In Footsteps in the Dark, George Lipsitz illuminates these secret meanings, offering imaginative interpretations of a wide range of popular music genres from jazz to salsa to rock. Sweeping changes that only remotely register in official narratives, Lipsitz argues, can appear in vivid relief within popular music, especially when these changes occur outside mainstream white culture. Using a wealth of revealing examples, he discusses such topics as the emergence of an African American techno music subculture in Detroit as a contradictory case of digital capitalism and the prominence of banda, merengue, and salsa music in the 1990s as an expression of changing Mexican, Dominican, and Puerto Rican nationalisms. Approaching race and popular music from another direction, he analyzes the Ken Burns PBS series Jazz as a largely uncritical celebration of American nationalism that obscures the civil rights era’s challenge to racial inequality, and he takes on the infamous campaigns to censor hip-hop and the radical black voice in the early 1990s.

Teeming with astute observations and brilliant insights about race and racism, deindustrialization, and urban renewal and their connections to music, Footsteps in the Dark puts forth an alternate history of post–cold war America and shows why in an era given to easy answers and clichéd versions of history, pop songs matter more than ever.

George Lipsitz is professor of black studies and sociology at the University of California, Santa Barbara. Among his many books are Life in the Struggle, Dangerous Crossroads, and American Studies in a Moment of Danger (Minnesota, 2001).