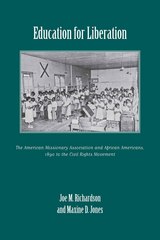 Even after the optimism of Reconstruction was shattered by violence, fraud, and intimidation and the white South relegated African Americans to segregated and disfranchised second-class citizenship, the AMA never abandoned its claim that blacks were equal in God’s sight, that any “backwardness” was the result of circumstance rather than inherent inferiority, and that blacks could and should become equal citizens with other Americans. The organization went farther in recognition of black ability, humanity, and aspirations than much of 19th and 20th century white America by publicly and consistently opposing lynching, segregation, disfranchisement, and discrimination.
The AMA regarded education as the means to full citizenship for African Americans and supported scores of elementary and secondary schools and several colleges at a time when private schooling offered almost the only chance for black youth to advance beyond the elementary grades. Such AMA schools, with their interracial faculties and advocacy for basic civil rights for black citizens, were a constant challenge to southern racial norms, and trained thousands of leaders in all areas of black life.