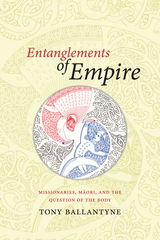 The first Protestant mission was established in New Zealand in 1814, initiating complex political, cultural, and economic entanglements with Māori. Tony Ballantyne shows how interest in missionary Christianity among influential Māori chiefs had far-reaching consequences for both groups. Deftly reconstructing cross-cultural translations and struggles over such concepts and practices as civilization, work, time and space, and gender, he identifies the physical body as the most contentious site of cultural engagement, with Māori and missionaries struggling over hygiene, tattooing, clothing, and sexual morality. Entanglements of Empire is particularly concerned with how, as a result of their encounters in the classroom, chapel, kitchen, and farmyard, Māori and the English mutually influenced each other’s worldviews. Concluding in 1840 with New Zealand’s formal colonization, this book offers an important contribution to debates over religion and empire.
AUTHOR BIOGRAPHY
Tony Ballantyne is Professor of History at the University of Otago. He is the author or editor of many books, including Between Colonialism and Diaspora: Sikh Cultural Formations in an Imperial World and Bodies in Contact: Rethinking Colonial Encounters in World History, both also published by Duke University Press.
REVIEWS
-- Nicholas Reid Reid's Reader Blog


-- Miranda Johnson Journal of the History of Sexuality

Conclusion. Bodies and the Entanglemetns of Empire 251