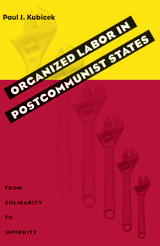 Paul Kubicek offers a comparative study of organized labor's fate in four postcommunist countries, and examines the political and economic consequences of labor's weakness. He notes that with few exceptions, trade unions have lost members and suffered from low public confidence. Unions have failed to act while changing economic policies have resulted in declining living standards and unemployment for their membership.

While some of labor's problems can be traced to legacies of the communist period, Kubicek draws upon the experience of unions in the West to argue that privatization and nascent globalization are creating new economic structures and a political playing field hostile to organized labor. He concludes that labor is likely to remain a marginalized economic and political force for the foreseeable.
TABLE OF CONTENTS