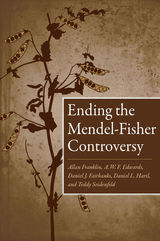 In 1865, Gregor Mendel presented “Experiments in Plant-Hybridization,” the results of his eight-year study of the principles of inheritance through experimentation with pea plants. Overlooked in its day, Mendel's work would later become the foundation of modern genetics. Did his pioneering research follow the rigors of real scientific inquiry, or was Mendel's data too good to be true-the product of doctored statistics?

In Ending the Mendel-Fisher Controversy, leading experts present their conclusions on the legendary controversy surrounding the challenge to Mendel's findings by British statistician and biologist R. A. Fisher. In his 1936 paper “Has Mendel's Work Been Rediscovered?” Fisher suggested that Mendel's data could have been falsified in order to support his expectations. Fisher attributed the falsification to an unknown assistant of Mendel's. At the time, Fisher's criticism did not receive wide attention. Yet beginning in 1964, about the time of the centenary of Mendel's paper, scholars began to publicly discuss whether Fisher had successfully proven that Mendel's data was falsified. Since that time, numerous articles, letters, and comments have been published on the controversy.

This self-contained volume includes everything the reader will need to know about the subject: an overview of the controversy; the original papers of Mendel and Fisher; four of the most important papers on the debate; and new updates, by the authors, of the latter four papers. Taken together, the authors contend, these voices argue for an end to the controversy-making this book the definitive last word on the subject.
AUTHOR BIOGRAPHY
Allan Franklin is professor in the Department of Physics at University of Colorado. He is the author of numerous books, including Are There Really Neutrinos? An Evidential History; Selectivity and Discord: Two Problems of Experiment; and No Easy Answers: Science and the Pursuit of Knowledge.

A. W. F. Edwards was R. A. Fisher's last student. He is professor of biometry (emeritus) at Cambridge University. His work includes Likelihood; Foundations of Mathematical Genetics; Pascal's Arithmetical Triangle: The Story of a Mathematical Idea; and Cogwheels of the Mind: The Story of Venn Diagrams.

Daniel J. Fairbanks is professor of plant and wildlife sciences and dean of undergraduate education at Brigham Young University. He is the author of Relics of Eden: The Powerful Evidence of Evolution in Human DNA and coauthor of Genetics: The Continuity of Life.

Teddy Seidenfeld is H. A. Simon Professor of Philosophy and Statistics in the Department of Philosophy at Carnegie Mellon University. He is coauthor of Rethinking the Foundations of Statistics.
TABLE OF CONTENTS