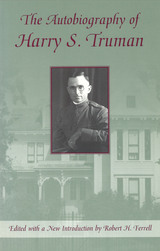 The Autobiography of Harry S. Truman
edited by Robert H. Ferrell
University of Missouri Press, 2002
Paper: 978-0-8262-1445-4
The Autobiography of Harry S. Truman is a compilation of autobiographical writings composed by Truman between 1934 and 1972. Taken directly from his own manuscript material, the volume presents the thoughts and feelings of the man himself. The book touches on details in Truman’s life from his days as a boy until graduation from Independence High School in 1901 to the vice presidency of the United States and beyond. There is also a memorandum written by Truman about the Pendergast machine in Kansas City telling how it was possible to work with the machine and not be soiled by it. The Autobiography concludes with some of the retired president’s thoughts about politics and the purposes of public life.
AUTHOR BIOGRAPHY

"I have been reading a book about me. . . . This book is supposed to be an educational one for young people. It contains more misstatements and false quotations than it contains facts and true statements from people purported to have been interviewed. . . . To save too many knowing spreaders of misinformation from going to hell on the present biography I guess I'll have to state the few interesting facts of my life without the introspective trimmings with which most so-called writers and half-baked essayists clutter up the printed page."—Harry S. Truman


"These accounts give one a flavor of the personality of the former President but refer more to his earlier life than his years in the White House. Perhaps most revealing is Truman's recollection of `Boss' Tom Pendergast who was convicted of tax fraud. Although Pendergast was sentenced to prison at Leavenworth, Harry Truman remained a friend and in his own words `never deserted him.' Truman the `man' may be found in these writings and that in itself makes the collection worth reading."—Choice


"Good reading for those who want to think their way through the period again."—American Historical Review