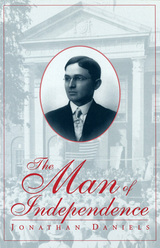 Having worked closely with Harry S. Truman in the triumphant campaign of 1948, Jonathan Daniels believed that President Truman was an "everyday" American, an ordinary human who aspired to greatness and achieved it. Thus, it was Daniels's intention that The Man of Independence not be a conventional biography; rather, he wanted it to reveal in real terms "the Odyssey of the 'everyday' American through our times." As a result, this comprehensive work not only presents Truman's life, it also details the development of the America in which the president grew up.

Truman spent his youth and his political life believing that old- fashioned, determined conservatism was vital to the preservation of personal liberty. Daniels re-creates Truman's remarkable journey through life—employing newspapers, letters, memos, family papers, as well as interviews with Truman, his family, and his close acquaintances. In the process, Daniels provides powerful evocations of the time during which Truman lived.

Daniels tells this extraordinary story by following this simple farm boy from Missouri through his youth and his years as a farmer, a veteran, and a businessman, on to his early career in politics, and then his presidency. Along the way, Daniels deals with issues, events, and ideas that were part of Missouri and American politics in the 1920s, 1930s, and 1940s; ultimately, he gives us the Truman who was to become the legend.

This inside account provides thought-provoking and personal information about Truman. His relationship with Thomas Pendergast, the seeming conflict between Truman's midwestern conservatism and his belief in equality for American blacks, and his momentous decision to use the atomic bomb to end the war—these are just a few of the topics touched on. Ending in 1949 when Truman was for the second time sworn in as president, The Man of Independence provides a fascinating and valuable look at one of America's most important and beloved presidents, as well as a crucial look at the America from which he emerged.

Jonathan Daniels served as Press Secretary to Franklin D. Roosevelt. He was the editor of the Raleigh, North Carolina, News and Observer and the author of several books, including A Southerner Discovers the South and Frontier on the Potomac.