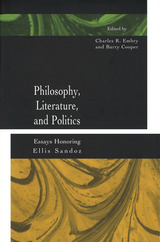 The essays in this collection honor Professor Ellis Sandoz, Hermann Moyse Jr. Distinguished Professor of Political Science, Louisiana State University, and founding director of the Eric Voegelin Institute for American Renaissance Studies, an institute located at Louisiana State University and devoted to research and publication in the fields of political philosophy, constitutional law, and Voegelin studies. Without the tireless leadership—both academic and economic—of Ellis Sandoz, who was one of Eric Voegelin’s early students and his first American doctoral candidate at the University of Munich, the thirty-four volumes of The Collected Works of Eric Voegelin would never have neared completion within only twenty years of Voegelin’s death.

The authors of the essays, some of the most respected scholars in the field of political philosophy, hail from Austria, Canada, the Czech Republic, Germany, Ireland, and the United States. They have known Sandoz in a variety of ways: as former students, as beneficiaries of his work on constitutionalism, as fellow participants in the publication of The Collected Works of Eric Voegelin, as philosophical colleagues, as participating members of the Eric Voegelin Society, and finally as friends.

The essays, each written especially for this volume, are grouped into the disciplines of philosophy, literature, and politics and range widely across these subjects, exploring writers as diverse as Xenophon, Natsume Soseki, Freud, and George Santayana and topics ranging from the leadership style of François Mitterrand and the Velvet Revolution to the nature of the Law and of the Political.

Philosophy, Literature, and Politics is a fitting tribute to a man whose life’s work has been formed by commitment to the philosophical enterprise and by a conviction in Eric Voegelin’s contribution to that enterprise. The seventeen essays in this collection will be of particular interest to scholars of politics, comparative government, Japanese studies, political philosophy, and literary criticism.
AUTHOR BIOGRAPHY
Charles R. Embry is Professor of Political Science at Texas A&M University–Commerce and the editor of Robert B. Heilman and Eric Voegelin: A Friendship in Letters, 1944–1984 (University of Missouri Press).

Barry Cooper is Professor of Political Science at the University of Calgary in Alberta, Canada. He is the author or editor of numerous books, including most recently New Political Religions, or an Analysis of Modern Terrorism (University of Missouri Press).
TABLE OF CONTENTS