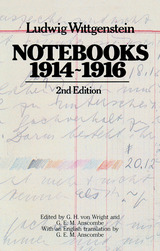 This considerably revised second edition of Wittgenstein's 1914-16 notebooks contains a new appendix with photographs of Wittgenstein's original work, a new preface by Elizabeth Anscombe, and a useful index by E.D. Klemke. Corrections have been made throughout the text, and notes have been added, making this the definitive edition of the notebooks. The writings intersperse Wittgenstein's technical logical notations with his thoughts on the meaning of life, happiness, and death.

"When the first edition of this collection of remarks appeared in 1961 we were provided with a glimpse of the workings of Wittgenstein's mind during the period when the seminal ideas of the Tractatus Logico-Philosophicus were being worked out. This second edition provided the occasion to be struck anew by the breadth, rigor, and above all the restlessness of that mind."—T. Michael McNulty, S. J., The Modern Schoolman
REQUEST ACCESSIBLE FILE