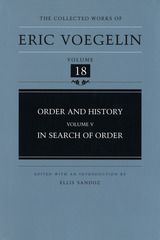 In Search of Order brings to a conclusion Eric Voegelin's masterwork, Order and History. Voegelin conceived Order and History as "a philosophical inquiry concerning the principal types of order of human existence in society and history as well as the corresponding symbolic forms." In previous volumes, Voegelin discussed the imperial organizations of the ancient Near East and their existence in the form of the cosmological myth; the revelatory form of existence in history, developed by Moses and the prophets of the Chosen People; the polis, the Hellenic myth, and the development of philosophy as the symbolism of order; and the evolution of the great religions, especially Christianity.

This final volume of Order and History is devoted to the elucidation of the experience of transcendence that Voegelin discussed in earlier volumes. He aspires to show in a theoretically acute manner the exact nature of transcendental experiences. Voegelin's philosophical inquiry unfolds in the historical context of the great symbolic enterprise of restating man's humanity under the horizon of the modern sciences and in resistance to the manifold forces of our age that deform human existence. His stature as one of the major philosophical forces of the twentieth century clearly emerges from these concluding pages. In Search of Order deepens and clarifies the meditative movement that Voegelin, now in reflective distance to his own work, sees as having been operative throughout his search.

Because of Voegelin's death, on January 19, 1985, In Search of Order is briefer than it otherwise might have been; however, the theoretical presentation that he had set for himself is essentially completed here. Just as this volume serves Voegelin well in his striking analyses of Hegel, Hesiod, and Plato, it will serve as a model for the reader's own efforts in search of order.