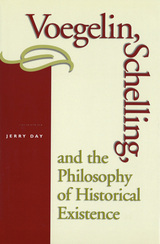 In this important new work, Jerry Day brings to light the need for an extensive reinterpretation of the mature philosophy of Eric Voegelin, based on Voegelin’s published and unpublished appreciation for nineteenth-century German philosopher F. W. J. Schelling.
Schelling, whom Day maintains was one of the most important guides to Voegelin’s mature philosophy of consciousness and historiography, has been described as the father of several disparate movements and schools of continental philosophy—chief among them being “Hegelian” idealism and existentialism. This characterization implies that Schelling was a scattered thinker with little or no appreciation for philosophy as a disciplined inquiry into the nature of human affairs.
Voegelin was critical of this portrayal of Schelling. He argued that it lacked proper sensitivity for the impressive extent to which this giant of continental thought was able to rise above the “creed communities” of his time and recover the abiding concern of mature philosophers everywhere: the philosophia perennis. Those who claim that Schelling was scattered have failed, according to Voegelin, to appreciate the nonideological breadth of this great philosopher, misled by the splinter movements and schools that arose from mere fragments of his thought. In truth, Schelling founded no school and launched no movement. Instead, he reasoned with the disciplined integrity and wonder of a “spiritual realist.”
Day argues that Voegelin was a fine interpreter of Schelling, particularly during the decisive years when the central orientation of Voegelin’s mature thought was beginning to take hold—between the writing of his History of Political Ideas and its eventual transformation into Order and History. Day gathers an impressive array of evidence to interpret Voegelin’s little-known support for Schelling’s achievements, while offering detailed analyses and helpful summaries of a vast body of literature that has yet to be translated into English.
Day’s partial agreement with Voegelin’s uncommon assessment of Schelling provides him with the point of departure that leads to one of this book’s most distinctive contributions to contemporary thought. It has the rare ability to help clear the way for philosophical realists to make peace with many of their contemporaries, giving them further grounds for accepting the strongest anthropological and psychological insights of recent continental philosophy, while helping them to avoid its tendencies toward nihilistic despair or fideistic historicism.
By reading each philosopher through the eyes of the other, Day provides an analysis that will be illuminating for Voegelin scholars and Schelling scholars alike. The book will also appeal to readers with more general interests in the history and development of continental philosophy, political theory, and comparative religion over the past century.
AUTHOR BIOGRAPHY

Jerry Day has a Ph.D. in Religion and Politics from McMaster University and is an independent scholar living in Toronto, Canada.