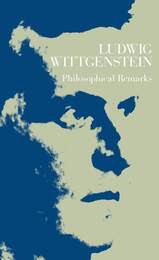 University of Chicago Press, 1980
Paper: 978-0-226-90431-3
When in May 1930, the Council of Trinity College, Cambridge, had to decide whether to renew Wittgenstein's research grant, it turned to Bertrand Russell for an assessment of the work Wittgenstein had been doing over the past year. His verdict: "The theories contained in this new work . . . are novel, very original and indubitably important. Whether they are true, I do not know. As a logician who likes simplicity, I should like to think that they are not, but from what I have read of them I am quite sure that he ought to have an opportunity to work them out, since, when completed, they may easily prove to constitute a whole new philosophy."

"[Philosophical Remarks] contains the seeds of Wittgenstein's later philosophy of mind and of mathematics. Principally, he here discusses the role of indispensable in language, criticizing Russell's The Analysis of Mind. He modifies the Tractatus's picture theory of meaning by stressing that the connection between the proposition and reality is not found in the picture itself. He analyzes generality in and out of mathematics, and the notions of proof and experiment. He formulates a pain/private-language argument and discusses both behaviorism and the verifiability principle. The work is difficult but important, and it belongs in every philosophy collection."—Robert Hoffman, Philosophy

"Any serious student of Wittgenstein's work will want to study his Philosophical Remarks as a transitional book between his two great masterpieces. The Remarks is thus indispensible for anyone who seeks a complete understanding of Wittgenstein's philosophy."—Leonard Linsky, American Philosophical Association
AUTHOR BIOGRAPHY
Ludwig Wittgenstein (1889-1951) was arguably the most influential philosopher of the twentieth century. He was born in Vienna, but studied and practiced philosophy in Great Britain. He was a professor of philosophy at the University of Cambridge from 1939 until 1947. He worked in—and transformed—the fields of logic, the philosophy of mathematics, the philosophy of mind, and the philosophy of language.
TABLE OF CONTENTS
Foreword
Analytical Table of Contents
Part I
Part II
Part III
Part IV
Part V
Part VI
Part VII
Part VIII
Part IX
Part X
Part XI
Part XII
Part XIII
Part XIV
Part XV
Par XVI
Part XVII
Part XVIII
From F. Waismann's shorthand notes of a conversation: 30 December 1930
Part XIX
Part XX
Part XXI
Part XXII
Appendix I
Complex and Fact
The Concept of Infinity in Mathematics
Appendix 2
Yardstick and System of Propositions
Consistency
Editor's Note
Translator's Note
Corrigenda for German Text
REQUEST ACCESSIBLE FILE