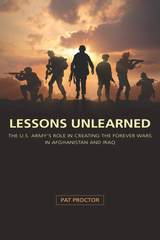 Colonel Pat Proctor’s long overdue critique of the Army’s preparation and outlook in the all-volunteer era focuses on a national security issue that continues to vex in the twenty-first century: Has the Army lost its ability to win strategically by focusing on fighting conventional battles against peer enemies? Or can it adapt to deal with the greater complexity of counterinsurgent and information-age warfare?

In this blunt critique of the senior leadership of the U.S. Army, Proctor contends that after the fall of the Soviet Union, the U.S. Army stubbornly refused to reshape itself in response to the new strategic reality, a decision that saw it struggle through one low-intensity conflict after another—some inconclusive, some tragic—in the 1980s and 1990s, and leaving it largely unprepared when it found itself engaged—seemingly forever—in wars in Afghanistan and Iraq. The first book-length study to connect the failures of these wars to America’s disastrous performance in the war on terror, Proctor’s work serves as an attempt to convince Army leaders to avoid repeating the same mistakes.
AUTHOR BIOGRAPHY
Pat Proctor, Colonel, US Army, Ret., is a veteran of both the Iraq and the Afghanistan wars. He recently served as a chief of operations group at the Mission Command Training Program and currently is an Assistant Professor of History at Wichita State University. He is the author of Containment and Credibility: The Ideology and Deceptions that Plunged America into the Vietnam War. He lives in Leavenworth, Kansas.
TABLE OF CONTENTS
Contents
List of Figures
Acknowledgments
Introduction
1. Phoenix or Icarus?
2. Somalia, Haiti, and Force XXI
3. Bosnia-Herzegovina and the Army After Next
4. Kosovo, the War on Terror, and the Objective and Interim Forces
5. “The First, the Supreme, the Most Far-Reaching Act of Judgment”
Bibliography
Index
About the Author
REQUEST ACCESSIBLE FILE