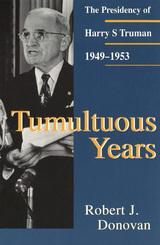 “In January of 1949 the aftershocks of the Second World War were still jarring large parts of the globe, although they had greatly diminished in the United States. In Asia, however, turbulence continued to rise as a result of the collapse of Japan, the tottering of the European empires after the war, and the combustion produced by nationalism mixed with communism. Because a segment of American opinion, generally represented in the more conservative wing of the Republican party, was very sensitive to events in Asia, the tremors in the Far East came as harbingers of disturbing political conflict in the United States.”
Robert J. Donovan’s Tumultuous Years presents a detailed account of Harry S. Truman’s presidency from 1949-1953.
AUTHOR BIOGRAPHY

Formerly a newspaper journalist and senior fellow at the Woodrow Wilson School of Public and International Affairs at Princeton University, Robert J. Donovan covered the White House during the Truman years for the New York Herald Tribune. He is the author of several books, including Conflict and Crisis: The Presidency of Harry S. Truman, 1945-1948. and Boxing the Kangaroo: A Reporter's Memoir (both with the University of Missouri Press).