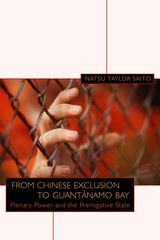 From Chinese Exclusion to Guantánamo Bay: Plenary Power and the Prerogative State
by Natsu Taylor Saito
University Press of Colorado, 2007
Cloth: 978-0-87081-851-6
Continuous expansion of executive power is igniting national debate: Is the administration authorized to detain people without charges or access to counsel, due process, or a fair trial? Is torture acceptable as long as it doesn't happen on U.S. soil? In a new study of the use of plenary power - the doctrine under which U.S. courts have allowed the exercise of U.S. jurisdiction without concomitant constitutional protection - Natsu Taylor Saito puts contemporary policies in historical perspective, illustrating how such extensions of power have been upheld by courts from the 1880s to the present.

From Chinese Exclusion to Guantánamo Bay also provides a larger context for understanding problems resulting from the exercise of plenary power. Saito explains how the rights of individuals and groups deemed Other by virtue of race or national origin have been violated under both the Constitution and international law. The differing treatment of José Padilla and John Walker Lindh - both Americans accused of terrorism - provides an example of such disparate approaches. Such executive actions and their sanction by Congress and the judiciary, Saito argues, undermine not just individual rights but the very foundations of our national security - democracy and the rule of law.

From Chinese Exclusion to Guantánamo Bay will interest readers concerned with the historical background of constitutional protection in times of war and peace and will provide fascinating new material for scholars, teachers, and students of law, history, and ethnic studies

AUTHOR BIOGRAPHY
Natsu Taylor Saito is an attorney and a professor at Georgia State University’s College of Law in Atlanta.
TABLE OF CONTENTS