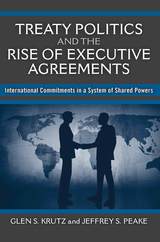 “Krutz and Peake’s book . . . puts another stake in the heart of the ‘imperial presidency’ argument.”
—Lisa L. Martin, University of Wisconsin–Madison, American Review of Politics

“Krutz and Peake reach their conclusions as a result of carefully crafted examination that might be cited as a model of political analysis of this sort . . . As [they] introduce each chapter with a summary of the argument as developed and supported to that point, the reader can enter into and understand their discussion and argument at virtually any point in the book. In sum, Treaty Politics and the Rise of Executive Agreements is a clearly written and important book that adds substantially to the existing literature on the presidency and on presidential-congressional relations.”
—Roger E. Kanet, University of Miami, International Studies Review

“One can only hope that this fine and challenging book starts an argument, or at least a dialogue, about presidential power in a post-Bush era. It merits the attention of presidency and congressional scholars, and those interested in the interaction of America’s political institutions.”
—Michael A. Genovese, Loyola Marymount University, Journal of Politics

Glen S. Krutz is Associate Director of the Carl Albert Center and Professor of Political Science at the University of Oklahoma.