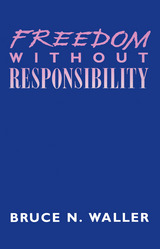 Freedom Without Responsibility
by Bruce Waller
Temple University Press, 1990
Cloth: 978-0-87722-717-5
"What I like most about this book is that it attacks two received positions. One, that a host of other judgments require the retention of moral responsibility The other, that moral responsibility is the best or only game in town when it comes to achieving various social goals. Received opinions are always in need of energetic attack, and the attacks here are both energetic and well written."