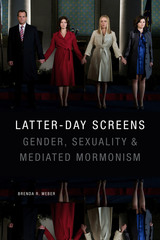 BUY FROM
Latter-day Screens: Gender, Sexuality, and Mediated Mormonism
by Brenda R. Weber
Duke University Press, 2019
Cloth: 978-1-4780-0426-4
eISBN: 978-1-4780-0529-2
Paper: 978-1-4780-0486-8
From Sister Wives and Big Love to The Book of Mormon on Broadway, Mormons and Mormonism are pervasive throughout American popular media. In Latter-day Screens, Brenda R. Weber argues that mediated Mormonism contests and reconfigures collective notions of gender, sexuality, race, spirituality, capitalism, justice, and individualism. Focusing on Mormonism as both a meme and an analytic, Weber analyzes a wide range of contemporary media produced by those within and those outside of the mainstream and fundamentalist Mormon churches, from reality television to feature films, from blogs to YouTube videos, and from novels to memoirs by people who struggle to find agency and personhood in the shadow of the church's teachings. The broad archive of mediated Mormonism contains socially conservative values, often expressed through neoliberal strategies tied to egalitarianism, meritocracy, and self-actualization, but it also offers a passionate voice of contrast on behalf of plurality and inclusion. In this, mediated Mormonism and the conversations on social justice that it fosters create the pathway toward an inclusive, feminist-friendly, and queer-positive future for a broader culture that uses Mormonism as a gauge to calibrate its own values.
AUTHOR BIOGRAPHY
Brenda R. Weber is Professor of Gender Studies at Indiana University, editor of Reality Gendervision: Sexuality and Gender on Transatlantic Reality Television, and author of Makeover TV: Selfhood, Citizenship, and Celebrity, both also published by Duke University Press.
REVIEWS


Acknowledgments ix
Past as Prologue: Latter-day Screens and History 1
Introduction. "Well, We Are a Curiosity, Ain't We?": Mediated Mormonism 13
1. Mormonism as Meme and Analytic: Spiritual Neoliberalism, Image Management, and Transmediated Salvation 49
2. The Mormon Glow: The Raced and Gendered Implications of Spectacular Visibility 91
3. The Epistemology of the (Televised, Polygamous) Closet: The Cultural Politics of Mediated Mormonism and the Promises of the American Dream 120
4. Polygamy USA: Visability, Charismatic Evil, and Gender Progressivism 162
5. Gender Trouble in Happy Valley: Choice, Affect, and Mormon Feminist Housewives 201
6. "Pray (and Obey) the Gay Away": Conscience and the Queer Politics of Desire 241
Conclusion. Afterthoughts and Latter Days 276
Epilogue. Mormons on My Mind, or, Everything I Ever Needed to Know about Hegemony I Learned in Mesa, Arizona 284
Notes 309
References 329
Media Archive 345
Index 361