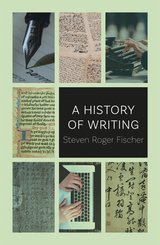 From the earliest scratches on stone and bone to the languages of computers and the internet, A History of Writing offers a fascinating investigation into the origin and development of writing throughout the world.

Commencing with the first stages of information storage, Fischer focuses on the emergence of complete writing systems in Mesopotamia in the fourth millennium BC. He documents the rise of Phoenician and its effect on the Greek alphabet, generating the many alphabetic scripts of the West. Chinese, Vietnamese, Korean and Japanese writing systems are dealt with in depth, as is writing in pre-Columbian America. Also explored are Western Europe's medieval manuscripts and the history of printing, leading to the innovations in technology and spelling rules of the 19th and 20th centuries.
AUTHOR BIOGRAPHY
Steven Roger Fischer is Director of the Institute of Polynesian Languages and Literatures in Auckland, New Zealand. He is the author of Glyph-breaker (1997). A History of Writing is part of Fischer’s trilogy for Reaktion, which also includes A History of Language and A History of Reading.
REVIEWS

"[It] is wonderful . . . to see a subject that embraces so much of human civilisation handled with the wide knowledge and breadth of vision it deserves."