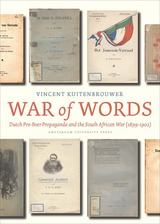 The Boer War gripped the Dutch public during the turn of the nineteenth century, when the Boer Republics, made up of descendants of seventeenth-century settlers from the Netherlands, were fighting the British Empire in South Africa. War of Words examines the ample Dutch propaganda during this time period, which attempted to counterweigh the British coverage of the war. Vincent Kuitenbrouwer offers a highly readable study of the pro-Boer movement in the Netherlands both during the Boer War and far into the twentieth century, while exploring the representation of South Africans in Dutch-language publications and the several persistent stereotypes that colored the Dutch attitude toward the Boers.
AUTHOR BIOGRAPHY
Vincent Kuitenbrouwer is a lecturer in the Department of History at the University of Amsterdam.
TABLE OF CONTENTS

Part I: Principles of Propaganda (1880–1899)
1. ‘New Holland’ in South Africa? Building a bridgehead between the Netherlands and the Boer republics
2. ‘Blacks, Boers, and British’: South Africa in Dutch literature
Part II: War of Words (1899–1902)
3. A ‘factory of lies’? The lines of communication of the Boers and their supporters
4. ‘A campaign of the pen’: the Dutch pro-Boer organisations
5. ‘Dum-dums of public opinion’: pro-Boer propaganda, October 1899–June 1900
6. ‘All will be well!’ Pro-Boer propaganda, June 1900–June 1902
Part III: The Aftermath of Pro-Boer Propaganda (Post–1902)
7. ‘Whoever wants to create a future for himself cannot lose sight of the past’: Willem Leyds and Afrikaner nationalism
8. From stamverwantschap to anti-apartheid: the significance of the pro-Boer movement in the Netherlands