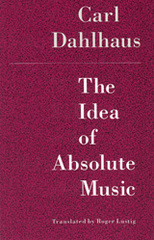 With a characteristically broad and provocative treatment, Dahlhaus examines a single music-aesthetical idea from various historical and philosophical viewpoints.

"Essential reading for anyone interested in the larger intellectual framework in which Romantic music found its place, a framework that to a remarkable degree has continued to shape our image of music."—Robert P. Morgan, Yale University

Carl Dahlhaus (1928-1989) is the author of a highly influential body of works on the foundations of music history and aesthetics.
TABLE OF CONTENTS


Translator's Introduction
1. Absolute Music as an Esthetic Paradigm
2. The History of the Term and Its Vicissitudes
3. A Hermeneutic Model
4. The Esthetics of Feeling and Metaphysics
5. Esthetic Contemplation as Devotion
6. Instrumental Music and Art-Religion
7. Musical Logic and Speech Character
8. On the Three Cultures of Music
9. The Idea of the Musically Absolute and the Practice of Program Music
10. Absolute Music and Poésie Absolue
Notes
Index