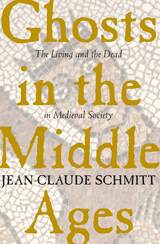 Through this vivid study, Jean-Claude Schmitt examines medieval religious culture and the significance of the widespread belief in ghosts, revealing the ways in which the dead and the living related to each other during the middle ages. Schmitt also discusses Augustine's influence on medieval authors; the link between dreams and autobiographical narratives; and monastic visions and folklore. Including numerous color reproductions of ghosts and ghostly trappings, this book presents a unique and intriguing look at medieval culture.

"Valuable and highly readable. . . . [Ghosts in the Middle Ages] will be of interest to many students of medieval thought and culture, but especially to those seeking a general overview of this particularly conspicuous aspect of the medieval remembrance of the dead."—Hans Peter Broedel, Medieval Review

"A fascinating study of the growing prevalence of ghost imagery in ecclesiastical and popular writing from the fifth to the fifteenth century."—Choice
TABLE OF CONTENTS