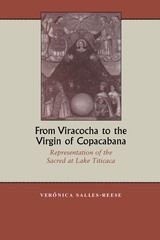 Surrounded by the peaks of the Andean cordillera, the deep blue waters of Lake Titicaca have long provided refreshment and nourishment to the people who live along its shores. From prehistoric times, the Andean peoples have held Titicaca to be a sacred place, the source from which all life originated and the site where the divine manifests its presence.

In this interdisciplinary study, Verónica Salles-Reese explores how Andean myths of cosmic and ethnic origins centered on Lake Titicaca evolved from pre-Inca times to the enthronement of the Virgin of Copacabana in 1583. She begins by describing the myths of the Kolla (pre-Inca) people and shows how their Inca conquerors attempted to establish legitimacy by reconciling their myths of cosmic and ethnic origin with the Kolla myths. She also shows how a similar pattern occurred when the Inca were conquered in turn by the Spanish.

This research explains why Lake Titicaca continues to occupy a central place in Andean thought despite the major cultural disruptions that have characterized the region's history. This book will be a touchstone in the field of Colonial literature and an important reference for Andean religious and intellectual history.