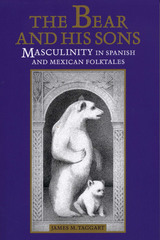 All the world over, people tell stories to express their deepest feelings about such things as what makes a "real" man or woman; what true love, courage, or any other virtue is; what the proper relationships are between people. Often groups of people widely separated by space or time will tell the same basic story, but with differences in the details that reveal much about a particular group's worldview.

This book looks at differences in the telling of several common Hispanic folktales. James Taggart contrasts how two men—a Spaniard and an Aztec-speaking Mexican—tell such tales as "The Bear's Son." He explores how their stories present different ways of being a man in their respective cultures.

Taggart's analysis contributes to a revision of Freud's theory of gender, which was heavily grounded in biological determinism. Taggart focuses instead on how fathers reproduce different forms of masculinity in their sons. In particular, he shows how fathers who care for their infant sons teach them a relational masculinity based on a connected view of human relationships. Thus, The Bear and His Sons will be important reading not only in anthropology and folklore, but also in the growing field of men's studies.

AUTHOR BIOGRAPHY
James M. Taggart is Lewis Audenreid Professor of History and Archaeology at Franklin and Marshall College in Lancaster, Pennsylvania.
REVIEWS
This is a bold and brilliant example of controlled cultural comparison... a major contribution.
— Alan Dundes, Professor of Anthropology and Folklore, University of California, Berkeley