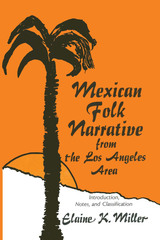 Urban Los Angeles is the setting in which Elaine Miller has collected her narratives from Mexican-Americans. The Mexican folk tradition, varied and richly expressive of the inner life not only of a people but also of the individual as each lives it and personalizes it, is abundantly present in the United States. Since it is in the urban centers that most Mexican-Americans have lived, this collection represents an important contribution to the study of that tradition and to the study of the changes urban life effects on traditional folklore.

The collection includes sixty-two legendary narratives and twenty traditional tales. The legendary narratives deal with the virgins and saints as well as with such familiar characters as the vanishing hitchhiker, the headless horseman, and the llorona. Familiar characters appear in the traditional tales—Juan del Oso, Blancaflor, Pedro de Ordimalas, and others. Elaine Miller concludes that the traditional tales are dying out in the city because tale telling itself is not suited to the fast pace of modern urban life, and the situations and characters in the tales are not perceived by the people to be meaningfully related to the everyday challenges and concerns of that life. The legendary tales survive longer in an urban setting because, although containing fantastic elements, they are related to the beliefs and hopes of the narrator—even in the city one may be led to buried treasure on some dark night by a mysterious woman.

The penchant of the informants for the fantastic in many of their tales often reflects their hopes and fears, such as their dreams of suddenly acquiring wealth or their fears of being haunted by the dead. Miller closely observes the teller's relation to the stories—to the duendes, the ánimas, Death, God, the devil—and she notes the tension on the part of the informant in his relation to their religion.

The material is documented according to several standard tale and motif indices and is placed within the context of the larger body of Hispanic folk tradition by the citation of parallel versions throughout the Hispanic world. The tales, transcribed from taped interviews, are presented in colloquial Spanish accompanied by summaries in English.