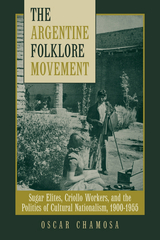 Oscar Chamosa brings forth the compelling story of an important but often overlooked component of the formation of popular nationalism in Latin America: the development of the Argentine folklore movement in the first part of the twentieth century. This movement involved academicians studying the culture of small farmers and herders of mixed indigenous and Spanish descent in the distant valleys of the Argentine northwest, as well as artists and musicians who took on the role of reinterpreting these local cultures for urban audiences of mostly European descent.

Oscar Chamosa combines intellectual history with ethnographic and sociocultural analysis to reconstruct the process by which mestizo culture—in Argentina called criollo culture—came to occupy the center of national folklore in a country that portrayed itself as the only white nation in South America. The author finds that the conservative plantation owners—the “sugar elites”—who exploited the criollo peasants sponsored the folklore movement that romanticized them as the archetypes of nationhood. Ironically, many of the composers and folk singers who participated in the landowner-sponsored movement adhered to revolutionary and reformist ideologies and denounced the exploitation to which those criollo peasants were subjected. Chamosa argues that, rather than debilitating the movement, these opposing and contradictory ideologies permitted its triumph and explain, in part, the enduring romanticizing of rural life and criollo culture, essential components of Argentine nationalism.

The book not only reveals the political motivations of culture in Argentina and Latin America but also has implications for understanding the articulation of local culture with national politics and entertainment markets that characterizes contemporary cultural processes worldwide today.
AUTHOR BIOGRAPHY
Oscar Chamosa is an assistant professor in the Department of History at the University of Georgia.
TABLE OF CONTENTS


List of Illustrations
Acknowledgments
Introduction
1 Precursors of the Folklore Movement
2 The National Folklore Survey of 1921 in the Calchaquí Valley
3 White Industry: The Cultural Politics of the Sugar Industry, 1912–1930
4 Tucumán’s Sugar Elite and Juan Alfonso Carrizo’s Fieldwork, 1928–1943
5 The Politics of Folklore under Conservative Rule, 1930–1943
6 On the Tafí Trail: Criollo Culture on the National Stage, 1938–1943
7 The Folklore Movement under Peronist Rule, 1943–1955
Conclusion
Notes
Bibliography
Index