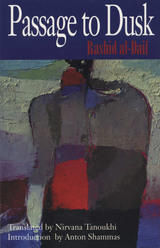 University of Texas Press, 2001
Paper: 978-0-292-70507-4
Passage to Dusk deals with the Lebanese civil war of the 1970s in a postmodern, poetic style. The narrative focuses on the deranged, destabilized, confused, and hyper-perceptive state of mind created by living on the scene through a lengthy war. The story is filled with details that transcend the willed narcissism of the main character, while giving clues to the culture of the time. It is excellent fiction, written in a surrealistic mode, but faithful to the characters of the people of Lebanon, their behavior during the war, and their contradictions. Issues of gender and identity are acutely portrayed against Lebanon’s shifting national landscape. The English-language reader has not been much exposed to Lebanese literature in translation, and Rashid al-Daif is one of Lebanon’s leading writers. He has been translated into eight languages, including French, German, Italian, Polish, and Spanish. Translator Nirvana Tanoukhi manages to preserve Daif’s unusual, moving, and at times humorous style in her English rendition.
AUTHOR BIOGRAPHY
Author of some ten novels in Arabic, al-Daif lives in Beirut. Translator Tanoukhi, a graduate student in comparative literature at the University of Texas at Austin, has a master’s degree in literary translation from the University of Arkansas. Anton Sham